Same-Sex Unions endgame is now upon 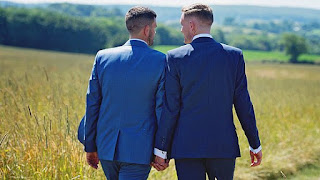 A Same-Sex Image from Limburg diocese,

We are now in a desperate situation, bishops and priests throughout the world and especially in Germany and Austria are dissenting from Church teachings on homosexuality in a big way. The Congregation for the Doctrine of the Faith has responded to a question "Does the Church have the power to give a blessing to unions of persons of the same sex?". It replied in the Negative. The CDF noted that marriage between a man and a woman is a sacrament and therefore blessings cannot be extended to same-sex couples. "For this reason, it is not licit to impart a blessing on relationships, or partnerships, even stable, that involve sexual activity outside of marriage (i.e., outside the indissoluble union of a man and a woman open in itself to the transmission of life), as is the case of the unions between persons of the same sex,"

Now it is only true and right for the Church to say this, and why it needed to state this again after all the documents released on this subject, along with the Church’s long history of teachings and Sacred Scripture itself shows us that the nefarious left/liberals are on the rise. Therefore enormous pressure is being put on the Church to change her teachings, even more now after the CDF response than before; it is almost as if it has become a catalyst for the same-sex unions endgame and the Church may lose her way here if she's not careful.

Bishops and hundreds of noisy priests are expressing their anger at the Vatican and are saying they will do the blessings anyway. Will they be censured for their dissent? - no, I very much doubt it! They will get away with it even more because the secular media will back them up and people will be influenced to express their dissent as well. Celebrities like Elton John (the anti-saints of our day) have joined in this demonic cacophony of hate towards truth and decency and the Church will not know what to do.

The German bishops are once again leading the way of dissent and have made it clear that they will do what they want, using the so called "Synodal Way" in a fraudulent fashion to do this. Over a third of German Catholics say they will leave the Church - not because of their Church not being liberal enough but because of the clerical child abuse. And as we know over 80% of child abuse by clergy is of a homosexual nature. It is exasperating that the very group, community, or whatever you want to call them, Gay, Homosexual, LGBT, carry out most of the abuse and yet these are the people the Church is trying to appease - and it's all because they have the secular media in their pocket.

Evil advances when good men do nothing. So what can be done?  We must do what we can and hope that others do the same.

We therefore call a prayer Crusade to help protect Holy Mother Church from bad bishops, priests, and laity who want to change the Church's teaching on Same-Sex Unions and homosexuality.

Please write a letter to Pope Francis in support of the CDF statement on same-sex unions - copy in the CDF and the president of the German bishops’ conference, Limburg Bishop George Batzing. Be respectful but unwavering in your support of the Church and Bible teachings on homosexuality.  Addresses:

·         Cardinal Luis Francisco Ladaria Ferrer, Prefect of the Congregation for the doctrine of the Faith, Palace of the Holy Office, Rome, Italy.

Posted by Clear Vision Catholics at 08:02