Is Paying the TV licence fee a Sin?

Is Paying the TV licence fee a Sin?

Of course the title of this blog post is a little tongue in cheek; after all, why shouldn’t a good Catholic - after a hard day’s work - sit in front of the telly?  However, it is also meant to make us think a little about the power of the television and how it’s sometimes used to undermine Christian ethics. For when you consider some of the programmes your licence fee is utilized to make, it does make you wonder. Programmes biased towards abortion, euthanasia, homosexual acts, contraception, etc. The genres used to engage with these social issues in an interventionist way, can be anything from soap operas and other dramas to current affairs programmes. Some media analysts question whether this is designed to circumvent the impartiality clause in the BBC’s Royal Charter, thereby changing people’s views and ultimately changing legislation by engaging them emotionally through entertainment, then following them up with current affairs programmes. By this means the BBC can construct and guide the general flow of public opinion and debate through multi-level programming.
When TV licence fee paying time comes around, do Catholics ever wonder what exactly they are funding? Some will say ‘Oh I only watch the news, or sport’ with sport often being cited as un-missable. And ‘I do love a good drama like the classic serial’ or ‘I like to watch documentaries’, and ‘I only watch selected good programmes, like EWTN’. However, in Britain, as in many countries where a licence fee exists, the fee also funds pro-abortion, pro-euthanasia, ‘politically correct’ and often anti-Catholic propaganda. Perhaps saying ‘I do not watch bad TV’ whilst funding it is not really a good excuse.  Would you buy poison for other people even though you would never take it yourself? The licence fee also helps TV advert revenue go further, to help C4’s make series like Skins. You can of course legally watch EWTN without paying the BBC by watching ‘on demand’ or catch up as long as you are not watching as it is being broadcast live. 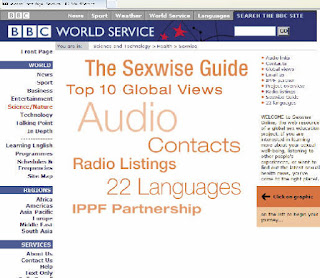 The TV licence fee - funding Culture of Death propaganda
If you just watch the News or documentaries, can you trust the licence fee funded BBC news to give the truth, the whole truth, and to be fair and impartial? We believe not. For example, will it give you the number of abortions that day? Even independent advert funded TV has ads for abortion companies these days. In 2011 the BBC appeared to be trying to change the law on euthanasia and assisted dying, with Sir Terry Pratchett’s documentary showing the death in a Swiss clinic of a sick man through assisted suicide.
The BBC did report on World Youth Day in Madrid, - but only to concentrate on a mere six thousand demonstrators while the huge crowd of one and a half million youngsters who attended Mass with the Pope was ignored.
There can be no doubt that the influence of TV, funded by viewers paying the licence fee, has radically changed society and its laws. A compulsory licence fee gives the BBC the freedom to indulge itself. Licence fee funded drama has been used to promote the legalisation, acceptance and normalisation of abortion through emotive plays and soap opera story lines. The BBC is adept at twisting any argument using various TV and radio genres to create a discussion format ‘with an unmistakeable flow of meaning.’1 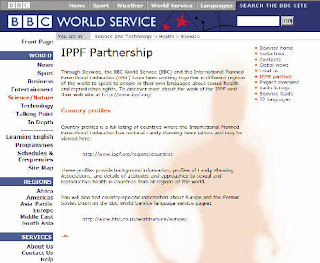 The BBC Partnership with the IPPF
It may surprise some Catholics that the BBC are actually in partnership with the IPPF, left is a screen shot from the BBC Sexwise website but don’t just take our word for it see the BBC Sexwise Website. The IPPF is one of the world largest abortion providers. Therefore, paying the TV licence fee is actually helping to fund the promotion of abortion to the world. The BBC World Service Sexwise programme was set up to promote what they euphemistically call Reproduce Rights especially to third world countries.

The TV licence fee - funding the destruction of childhood innocence
Some paediatricians are worried that the television corrupts the minds of children and causes bad behaviour. What else can the TV do but destroy childhood innocence with programmes that contain pornography, violence and story lines that promote life-styles that are incompatible with Christianity. Teachers in a Lancashire school even came out on strike because their pupils were out of control, - pushing them, challenging them to fights, and threatening to film their lessons and post the film online. Advert funded TV is just as bad.

Sport on the telly is just another distraction, funding immensely rich sportsmen who sometimes give scandalous examples to the young.  Footballers appear to spend as much time cheating (on and off the field) and taking out gagging orders as playing football.
Every year since the TV became the dominant media force church attendance has dropped. People have ‘better’ things to do than say their prayers and go to church. One should also ask, is the TV of any use for our pilgrimage through life and into eternity, or is it a hindrance?
Could it be argued that by watching TV you are making an offering - the licence fee - on the altar of the antichrist? Therefore, go that extra mile for Christ, throw out the TV. Don’t fund the promotion of abortion and all kinds of sexual deviancy which leads to the destruction of childhood innocence.


BBC personnel have been given up to £90,000 relocation package to move to Salford
When the Jimmy Savile scandal erupted many people said “I expect it’s the poor licence fee payer who will have to pick up the compensation bill to the many victims of child abuse at the BBC”. However, the BBC appears to be getting away with it, so no worries there. The poor licence payer is having to pay up to £90,000 relocation packages for BBC staff moving to the new Media City in Salford from London. So far the BBC has spent £740,846 on estate agents’ fees; £497,617 on removals; £350,000 on legal fees; £305,962 on furnishings and £1.2 million on stamp duty. Staff who do not want to move from London are being given extra allowances to fund staying away during the week and coming home weekends; this is called the remote location allowance. Staff who have take this option get £3,390 a month before tax, equivalent to £40,680 a year. To date, this has cost the corporation £3.3  million. These figures are going to rise over the next decade with more departments and progammes moving to Media City. Who was it who said that crime doesn’t pay? - Merely asking the question you know. : - )
Reference: 1 MacMurraugh-Kavangh M K, Drama into News: Strategies of intervention, Screen 1997, London.
Posted by Clear Vision Catholics at 09:26