She's got rid of Piers Morgan 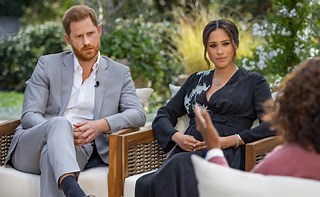 How boring. I didn't really want to comment on this: Harry and Meghan on Oprah Winfrey show's diss the Royal Family. How could you just sit there Harry and listen to your family being called racist, -  man or mouse? Poor Harry as Trump implied when asked about Meghan. This hideous Oprah Winfrey show is a worth series of blog posts in its own right! Full of whining celebrities talking about how badly the world is treating them and at the same time doing their bit to destroy civilisation.

Unbelievably, more than all the troubles in the world, the story of this soap opera of the interview has dominated world news more than Biden re-invigorating the war in the Middle East or Covid itself!

However, perhaps something good did come from it. Piers Morgan (heretic Catholic and Good Morning Britain host) walked off his show after being cornered for supporting the Royal family against Meghan's assertions, by his weather man (you can't make this up).

So keep it up Meghan. Perhaps you are really the Queen's secret agent assigned to get rid of worthless Woke, left/liberal, politically correct civilisation destroyers, although I doubt it your probably one of them. But if you are then who do you turn your guns on next, Oprah Winfrey herself?  Except I doubt it, and Morgan will probably turn up somewhere where he can do even more harm.
by Prayer Crusader St Philomena
Posted by Clear Vision Catholics at 10:22