For many years now Catholics have wondered what’s happened to the respectability of the BBC and the other channels. It has been quite clear that the standards of broadcast morality have been slipping steadily. From the first expletives being issued in the sixties and seventies. To the sex and violence of the nineties and the new millennium.  There has been a steady demoralisation and desensitising of the viewer. 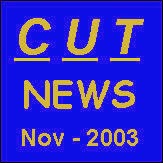 There is also a clear Anti-Catholic bias. The BBC and other channels maintain that this is not the case. However Catholics are concerned and CUT believes there is a genuine issue here, it first really came to light during Christmas 1999 when every country throughout the Christian world broadcast from St Peters in Rome except the British. Even Finland with only 6,000 Catholics took the Mass live. Yet on British TV we had a live Anglican service on both the BBC and on ITV. It has continued thus ever since with the occasional sop thrown to the Catholics.

Do not be taken in by the broadcast by the BBC from St Peters of the Beatification of Mother Theresa, not to have broadcast it would have been just too blatant. There were enough instances of bias during the preceding week in which they reveal their true colours.
Our aims are that the BBC and other TV stations take their responsibility seriously. That the BBC in particularly who are there not only to entertain us but are leaders in broadcast standards. If the BBC is to be known as Public Service Broadcasters they must act with fairness and moral sensitivity to its viewers. To make programmes that undermine the teachings of Jesus, with licence fee funds paid by Catholics and other Christians is totally unacceptable. If they wish to continue thus, then the licence fee should be abolished and a pay to view system installed. Therefore those who find this kind of programme acceptable, can pay for it and view it, Catholics and other Christians can avoid it. Our conscience will no longer be troubled that we are funding sin.

Many thanks to Robert Doyle of the Catholic Times and to Catholic World News for reporting on our efforts, the following article is from CWM.com London, Oct. 20:
British Catholics plan BBC boycott
Some of Britain's Catholics are registering their protests against the British Broadcasting Corporation (BBC) by switching off their televisions, after the Bishops of England and Wales charged the network with anti-Catholic bias. The BBC has come under fire from Archbishop Vincent Nichols of Birmingham for its planned cartoon, Popetown, and for documentaries, which blame the Catholic Church for the spread of Aids and for covering up cases of child abuse by priests.             Now a new pressure group, Catholics Unplug Your Television (CUT) is urging the faithful to switch off the sets and to stop paying their TV licences. The group's founder, Stefano Mazzeo, told the Catholic Times that every time Catholicism is mentioned on the BBC it is followed by "a detrimental comment". "Eventually it got too much," he said. "I unplugged my television and wrote to them and said I would no longer pay my licence fee.”
In Britain, every household pays a TV license of more than £120, which directly funds the BBC. Even householders who only watch commercial TV stations must pay the license or risk a fine or even imprisonment.
Mazzeo told the Catholic Times that "the whole ethos of broadcast television is dangerous, but the BBC is the biggest problem because you cannot pick and choose what you see without paying the license fee. He cited several recent attacks on Catholicism in several BBC programs, which were "offensive and anti-Catholic". Mazzeo said that, while he doesn't yet have accurate figures, thousands of people have now told the BBC they will no longer be paying the license fee, regardless of the consequences.

NOVEMBER 5th BBC RADIO 5 LIVE 4.25 PM –The Catholic Church to blame for the African AIDS Crisis!
Just when you thought it might be safe to turn on the Radio and listen to some sports reports, what do you get but a dry old presenter interviewing a priest working in Africa who is being used as a guinea pig for an anti HIV drug. Very good you might think until you realise where the questioning is going and this priest is really a dissident. The presenter then goes on the blame the Church’s teaching on condoms for the crisis.
Talk about exasperating bias, when it is really the Western media and the BBC who are to blame with the promotion of life-stiles that lead to fornication and adultery the real causes of HIV and AIDS. The priest of course obliges the BBC and has a dig at the Bishops who promote abstinence and chastity instead of the use of condoms. Where is the other side of the argument, of course no credence is given to it. CUT dares the BBC to come up with one programme that gives the church’s teaching in a logical and reasoned way without brow beating us.


Auntie Beeb becomes the Wicked Stepmother
As the Christmas season draws near one wonders what it will be like without a TV. More traditional perhaps more spiritual with more time for family and friends and more time for Jesus and the true meaning of Christmas.
What of Auntie BBC at the festive season, more sex and violence, more extraordinary, implausible, angry plots on East Enders? Perhaps even the first Christmas Lesbian Kiss? Yuck!
Perhaps even a farce or a pantomime, no that’s their corporate philosophy. Or perhaps they will wake up and realise they are Killing the Goose that laid the Golden Egg.

What to do if you unplug your TV
If you have unplugged your TV or thrown it out, let them know. If you are you are using your TV to play videos only, detune it. Or have your TV set and video adapted that it cannot receive broadcast television. If you have your TV set adapted have it done professionally by a reputable technician, TV repair shops should be able to do this service.

If you only watch EWTN you may not need to pay the licence fee anyway as this station is from the USA. Check with TV licensing:


The BBC loses its journalistic integrity and our respect.
From an Oxford CUT supporter.
In today's program at around 8:15: How typical of the BBC's "high journalistic standards" to give the last word on Mother Theresa to the scurrilous and sensation-seeking Christopher Hitchens, a man who chooses to make a living from destroying the reputation of good people.
And what a last word - the indefensible assertion that nothing that is commonly believed about her is true. John Hmphries' closing remarks as good as ratify his sweeping statements. This is just one more of the daily instances which confirm the growing certainty in a large number of listeners that the corporation is doing little or nothing to curb the ideological bias of its journalists, and in so doing is gravely undermining its very raison d'etre as an objective conveyor of news.

Is the BBC to blame for the spread of HIV and AIDS in Africa?

There have been many instances where BBC journalists point the finger at the Catholic Church for tragic the spread of HIV in Africa. But could the real culprit be the BBC and western broadcast media? For if you turn on the TV any night of the week you will find either adultery, fornication and homosexuality made to look benign. As one person who contacted CUT remarked when you watch a TV programme the hero and heroin end up in bed with marriage not even as issue.
Surly it is these practices that are shown to be such fun by the TV programme makers, which are the real cause of the spread of AIDS not the Catholic Church’s teaching on chastity and abstinence.
Programmes like Sex and the Vatican are made to try

Posted by Clear Vision Catholics at 03:31