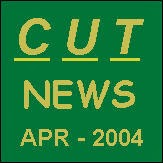 This article relates to the BBC Panorama’s ‘Sex and the Holy City’ the producer of which was a homosexual activist and was aloud to grind his own personal axe against Catholic teaching at the TV licence payer’s expense. But the truth is Condoms are killers

THE BBC and the CULTURE OF DEATH

During the weeks leading up to the 25th anniversary of John-Paul II becoming Pope there was an increase in what many saw as anti-Catholic programmes broadcast on the BBC. Was this deliberate spoiling tactics by certain elements in the Corporation annoyed at the joy felt by Catholics at this time, or just a coincidence?  The Bishops Conference of England and Wales felt strongly enough to issue a statement on the 17 October 2003 saying that the BBC’s reputation for fairness and objectivity is increasingly tarnished.

It is very interesting to look at two programmes Sex and the Holy City and the Sexwise website it has been reported that they are both linked with the IPPF (International Planed Parenthood Federation) and ask are there vested interests involved? The IPPF promote condom usage and abortions throughout the world, in the USA the Planed Parenthood Federation of America made a profit of $36.6 million from performing abortions alone.

During the making of Sex and the Holy City the BBC interviewed Cardinal Lopez Trujello, President, Pontifical Council for the Family. The Cardinal reported that they interviewed him for over an hour on different questions. However, what was broadcast was merely three questions of not more than half a minute each the answers to which were edited. Is this what some call being economical with the truth or simple dishonesty?

Unknown to Cardinal Lopez Trujillo at the time, this programme’s aim was to deliberately systematically criticize the Catholic Church’s teaching on the use of condoms, accusing her of causing the death of people in Africa. Of course, the argument is absolutely ridiculous for if someone will not listen  to  the  church’s teaching on chastity and fidelity in marriage they will hardly listen to its teaching on condoms.

In fact the real cause of the AIDS crises anywhere is liberal attitudes to sex. Attitudes seen every day on the TV. Condoms are not the solution in Africa or anywhere. “…despite the invitation to promiscuity made by the “safe sex” campaign and the distribution of an enormous quantity of prophylactics (condoms used to stop sexual diseases) where the pandemic is more widespread, the problem of infection has become even greater” (Cardinal Lopez Trujillo)

Perhaps it is no coincidence that the other programme linked to the IPPF is the BBC’s Sexwise website which in conjunction with BBC World Service promotes condom usage on a global scale. It also actively campaigns for the removal of laws prohibiting abortions in countries where they are now illegal.
Is this the real reason why the BBC tries to discredit the teaching of the Catholic Church the BBC is in bed with the IPPF?

Classic FM news report on Good Friday 2004 stated the medical experts in Britain and the USA are now stating the only way of controlling the AIDS pandemic is to limit the number of sexual partners. So the Church’s teaching was right all along only we limit our partner to our spouse alone.

We would like to thank Cardinal Lopez Trujillo for his strong leadership in this matter, also his letter of support for CUT and drawing our attention to his document “Family Values Versus Safe Sex” He invites us to visit the website of the Pontificum Consilium Pro Familia at: http://www.vatican.va/roman_curia/pontifical_councils/family/

BBC in a mess over Popetown
There have been many conflicting reports over the intended screening of Popetown but having phoned the BBC at the time of issuing this newsletter no date has been set. There is even a rumour that they are editing it to make it less offensive to Catholics. They stated that they are not going to scrap it or make it less offensive to Catholics.
We feel that they would need to start from the beginning to do that which is improbable considering they have spent £2.6 to produce it.
What will this offensive and according to the Catechism of the Catholic Church (2148) blasphemous cartoon achieve? At CUT we believe it will cause great distress to the Catholic community because:
·            It strikes at the Pope the successor of St Peter and satirises his office.
·            It will incite anti-Catholic ridicule in the workplace and in social situations.
·            It shows the Pope as an infantile 77 year old who bounces around the Vatican on a pogo stick, who’s every whim must be satisfied. Is this ageism?
·            It shows the Cardinals to be sinister and corrupt this is of course what the BBC would like them to be. However, the opposite is true.
To single out a law abiding and peaceful section of the British people such as Catholics to this kind of attack is deplorable. One has to ask why are they doing this? Is it because we stand for certain moral values that are different to the BBC’s, so in order to destroy these values they mock and satirise the Pope and the Vatican.

The Holy Father’s Concern Regarding the Media and the Family

On the 24th of January 2004 the feast of the patron saint of Journalists Saint Francis de Sales, Pope John Paul II issued a letter regarding the mass media. In this letter he is clearly concerned with the direction it is taking, he seems to suggest it is an opportunity missed for humanity as a whole. He says it has brought exceptional opportunities to enrich the lives of both individuals and the family. ‘At the same time, families today face new challenges arising from the varied and often contradictory messages presented by the mass media.’1 How often has one settled oneself in a favourite chair to watch a play a film or a documentary only to be shocked or embarrassed by what you have just seen? We are often told ‘you can always reach for the switch and turn it off’ however by that time its usually too late. You have been forced against your will to hear blasphemy or seen things which you do not wish to see or subject your friends and family.
The state of the media must make our Holy Father especially sad since he was once an amateur actor in Poland before training for the priesthood. During the war when Poland was under Nazi occupation he was part of the secret Rhapsodic Theatre, it is perhaps from this time that the Holy Father acquired his rich warm sounding voice, the voice that helped bring down communism. That voice now very frail still resonates with love, peace and wisdom. Fellow actor at the time Jerzy Turowicz said, “I think it was the general opinion that Wojtyla was the best actor in the small group.”2 The Rhapsodic Theatre produced plays based on faith and Catholicism, which for a Pole was synonymous with patriotism. Even today we should believe that to really love your country you must want Christ to be a major influence in it.
So the media particularly the TV must be in a grave state for the Holy Father to have suggested a few years ago that Catholics give up the TV for lent. He also asked TV executives to “relinquish your adherence to programme planning geared to instant success and maximum audience ratings.”3 It is quite clear that the real reason for the Holy Father’s concern over the Television is it’s negative effect on the family

“…development, particularly in children. The child lives on sensations alone, seeking new ones all the time…and often remains intellectually passive; the intellect does not engage in the search for truth; the will remains bound by habit.”4

The Holy Father’s message released for the 38th World Communications Day, to be held this year on Sunday, 23 May is intitled “The Media and the Family: A Risk and a Richness.” In this message the Pope clearly shows he is aware of the strength of the media to affect peoples lives.

“Infidelity, sexual activity outside marriage, and the absence of a moral and spiritual vision of the marriage covenant are depicted uncritically while positive support is at times given to divorce, contraception, abortion and homosexuality. Such portrayals, by promoting causes inimical to marriage and the family, are detrimental to the common good of society.”5

He is concerned that the policy-makers in the media appear to be actually hostile to traditional family values and traditional cultures and promote the globalisation of secular values, which aid the consumer society.  Could it be that money is at the heart of the promotion secular values the media? Those who produce TV programmes are not interested in the family for it does not pay so well. A homosexual has more money to spend than a married man in certain sectors of society e.g. the entertainment industry. Divorce, contraception and abortion are all muti-million pound industries.

Is watching too much TV harmful?
There is a view in some quarters that watching too much TV is actually harmful. So first of all let us analyse what we are actually doing by watching the TV, we are staring at a light. This light seems to have a mesmerising effect on the viewer. It appears to induce a trance like state some people who when you interrupt their viewing they can get very angry.
From recent news reports it seems that:
1.       TV-watching, with the resulting lack of physical exercise, shares the blame with junk-food for the obesity epidemic.         And this is a particular problem with children
2.       TV-watching is one reason for the number of people suffering from Sleep Deficiency problems.   And,  again, there is a particular problem with children.
3.        Excessive TV-watching by small children is sometimes blamed for some children's failure to develop communications  skills. If anyone has information on the TV and public health please pass it on to CUT at the above address.

Recent appalling TV developments
efore we mention the new and frightening developments in broadcast television programmes, we would like to point out some of the good things that have been broadcast in the past. For example there have been the classic dramas such as Pride and Prejudice and the marvellous natural history programmes. There was also a time when BBC news could be trusted, this is no longer the case.
Regularly these days on prime time TV, in the soaps such as East Enders and Coronation Street are pro-homosexual storylines. Other regular storylines desensitise the viewer to moral issues mentioned by the Holy Father.
There is also another awful development, the showing of an abortion on Channel 4. We at CUT are astonished that Channel 4 can show this yet stopped the showing of the Pro-Life Alliances election broadcast (along with the BBC) in the name of bad taste!
CUT’s philosophy has a double benefit not only do we refuse to financially support these corrosive programmes we also refuse to watch them. Therefore advertisers as well as licence fee receivers miss out.
Posted by Clear Vision Catholics at 07:47