The 'Vaccine' and Irish bishops part 1

Catholic Teaching and the 'Vaccine'

Greetings in our Lord Jesus Christ, 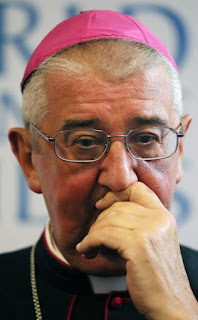 Sometime ago you made a statement on receiving the corona virus, sars-cov-2  ‘vaccine’. In your statement on the experimental vaccine, though not saying it outright, it was certainly implicit that everybody including  Catholics,  should take the vaccine. From the moment the covid farce 19 news started hitting the airwaves it was clear that there was something amiss with this whole thing: the stoking of fear, of mis-information, of dis-information, of censorship of information, of the abuse of power of some holding an alternative agenda. This has continued on, unabated, even intensified since March 2020. I hope in this letter to show you that I respectfully disagree with you and why I disagree with you.

Your statement, as you say, is based on the statement made by the Vatican on Dec 2020, which drew from the statement from the Pontifical Academy of Life 2005, in a reply to Ms Debi Vinnedge who enquired as to the use of aborted babies’ remains in the Rubella vaccine. You may also be alluding to the statements made by the English and Welsh bishops made also in Dec 2020 where they selectively quote from the 2005 Vatican statement. The document from the pontifical academy 2005 is a fine document up to the point where, after finding that even though a vaccine has fetal remains in it, the writers state that it is wrong and then conclude that it is still ok to receive the vaccine.

“, the use of vaccines whose production is connected with procured abortion constitutes at least a mediate remote passive material cooperation to the abortion, and an immediate passive material cooperation with regard to their marketing. Furthermore, on a cultural level, the use of such vaccines contributes in the creation of a generalized social consensus to the operation of the pharmaceutical industries which produce them in an immoral way.”

So how they got from saying this to saying it is morally acceptable is difficult to see. Be that as it may, even if we take this at face value we shall have a look at the taking of the sars-cov-2 experimental vaccine according to the points set out in the Vatican statements.

Firstly, this statement by the Vatican is not a magisterial document. It is a body which can even have non-Catholic people working in it. It is not a sacred Congregation. So a Catholic is not bound by this statement.

"The fact of the matter is, pontifical academies are very low in the scale of authority and even non-Catholics can be members. (And as it happens Some are and have even made pro-depopulation statements),  It's not a Sacred Congregation that has papal authority when upholding the perennial Magisterium Hence, its document on vaccines can be viewed as an informative opinion piece, nothing more.” ( Deacon Nick Donnelly)

So a Catholic is not bound by this statement.

Even if we are to accept this Vatican statement let’s have a look at it and to see if according to its stipulations, it is ok to take experimental gene altering experimental therapy.

The first stipulation it makes is,

“If persons are exposed to considerable dangers to their health, vaccines with moral problems pertaining to them may also be used on a temporary basis.”

These are the odds of the average person coming down with COVID and are quite low. Is this worth shutting down large swaths of the economy for? Have we ever done that for seasonal flu?

If you look at the entire study population of about 35,000, this many individuals would need to be vaccinated to keep one person out of the hospital. And that one would likely recover. That’s what the vaccine provides.”

“The number of deaths among recent cases is less than one in a thousand. This data reflects a disease much less severe than the average annual flu,”.   (Source, Digital Desk staff)

A group of over 200 German and Spanish doctors have set up an international investigation into Covid-19, called ‘The Covid-19 Extra-parliamentary Committee‘.’ They have stated ‘We don’t need to be anxious about covid-19 because it’s no different to the seasonal flu that we have every year.’

A group of doctors from Spain have got together to refute the disinformation surround covid. They have stated:

We say to citizens: don’t be afraid, this virus is benign unless you are part of the at-risk populations. If the TV channels do the same thing with the flu, the numbers will be much higher than for the coronavirus! On average, television will report an average of 3 million cases and 2,000 deaths from the flu every day. And for tuberculosis, television will report an average of 30,000 cases and 5,000 deaths every day. The flu virus infects 1 billion people every year and kills 650,000, and tuberculosis infects 10.4 million people every year and kills 1.8 million.  Doctors for truth,  (Source, Europe Reloaded.)

From an epidemiologist on the irrationality of reaction to covid,

“I have never seen anything like this, anything anywhere near like this. I’m not talking about the pandemic, because I’ve seen 30 of them, one every year. It is called influenza… But I’ve never seen this reaction, and I’m trying to understand why.” —Dr Joel Kettner, professor of Community Health Sciences and Surgery at Manitoba University, Medical Director of the International Centre for Infectious Diseases;

If we dissect the World Health Organisation’s (WHO) own statements it can be seen that covid isn’t is in line with flu deaths. This is what Kit Knightly has done,

It’s a good expose and I will

Dr Michael Ryan has stated that about 10% of the world has been infected with covid on oct 5th 2020, trying to frighten us, the death toll then was just over 1,061,539 and the media used this to scare us and governments used it to justify lockdowns. The world has 7,800,000,000 on the planet which makes the covid death rate 0.014 which is the same as influenza rates which is 24 times lower than the WHO’s estimates of 3.4 % last March. Though this was used by the media to scare us. Did no-one in the media do the maths, they obviously didn’t want to. If we do the maths it should re assure that there is no deadly pandemic but scaremongering and grist for the mill for the media baying for lockdowns and leading to government capitulation to placate the media which led to severe lockdowns and disruptions of people’s lives. And now to experimental vaccines

Dr Roger Hodkinson is a virologist, a Pathologist and was chairman of the Royal College of Physicians, Canada’s pathology committee, and is the chairman of a Biotechnology company in America. He had this to say on governments’ and media’s response to the so called deadly pandemic,

“The bottom line is simply this: there is utterly unfounded public hysteria driven by the media and politicians. It’s outrageous. This is the greatest hoax ever perpetrated on an unsuspecting public. There is absolutely nothing that can be done to contain this virus, other than protecting older more vulnerable people. It should be thought of nothing more than a bad flu season.”

“Masks are utterly useless. There is no evidence based for their effectiveness whatsoever. Paper masks and fabric masks are simply virtue signalling.”

“Social distancing is also useless because Covid is spread by aerosols which travel 30 metres or so before landing. Enclosures have had such terrible unintended consequences. Everywhere should be open tomorrow.“

“Using the province’s own statistics, the risk of death under 65 in this province is 1 in 300,000. You’ve got to get a grip on this. The scale of the response that you’re undertaking with no evidence for it is utterly ridiculous.”

Dr Simon Thornley a Public Health Physician, lecturer and researcher in the section of Epidemiology and Biostatistics states that covid is not much more serious than flu. He quotes the Ioannidis study done at Stanford university which states the same. He is also supported by

“The Ioannidis study shows the death rate (for COVID-19) is only very marginally worse than the standard flu viruses that kill hundreds of sick and elderly New Zealanders every year.”

Simon Thornley, senior lecturer in epidemiology, University of Auckland. September 6, 2020. He is part of COVID Plan B, a group of six academics including three health science lecturers. The group has called for an end to COVID-19 lockdowns, arguing the risks of the virus have been overstated and lockdowns are more harmful than the virus itself.

Posted by Clear Vision Catholics at 07:42