A corrupt media and establishment zeroing in on faithful Catholics

The Media Crucifixion of Cardinal Pell. 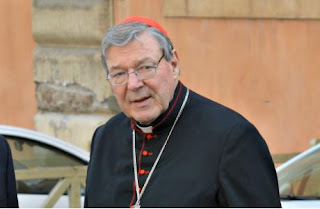 It is clear from all the evidence that Cardinal Pell of Australia could not have committed the child molestation he has been imprisoned for. So why has he been convicted and put in prison? There are perhaps two reasons for this: one, he is the most prominent Catholic in an extremely anti-Catholic country; and two, he refused LGBT activists Holy Communion at the altar rail. From that moment onwards the Australian media went for him in a big way.

There was in place a witch hunt for evidence. Detective Chris Reed pursued Pell for years long before anyone accused the Cardinal of anything; he was accused of "zeroing in" on Pell, adverts were taken out in the press for people to come forward who had been molested by Pell. Some did come forward; however most were dismissed as not credible. However, two choir boys claimed that Pell molested them after Mass. The media and "celebrity" world went ballistic; journalists went on a feeding frenzy. They've always claimed that Catholic and biblical teaching are hateful; now they have a chance to discredit it all, and that's what it's all about, undermining Catholic moral teachings, nothing else. Of course ultra anti-Catholic bigot Tim Minchin, who could not write a song about Pope Benedict without adding more expletives than other lyrics - "Pope song" a hate inducing piece of anti-Catholic garbage if ever I heard one. Minchin wrote another song, a lullaby to Pell to get him imprisoned. Oh, Satan is very clever.

So let's look at what happened 2002. Cardinal Pell refused Holy Communion to "Gay and lesbian  Catholic" activists at the altar rail; the activists were making a point of protest during Mass by wearing the Rainbow Sash. Therefore they were  trying to force the Church to accept something that is wrong and against the teachings of Sacred Scripture and of the Church, and forcing the Church's hand. From then on of course the media, the LGBT brigade and their supporters were out to get him.

The accusations are that Cardinal Pell sexually abused two choir boys after Mass while he was fully vested, in a busy sacristy where people go in and out after Mass all the time,  the MC, the altar servers, the sacristan and other visitors who visit the sacristy after Mass etc. etc. The "molested" choir boys then returned to practise with the choir, through doors that were always kept locked. Not only that but one of the boys has since died but before he died he told his mother that he was not molested! So the Cardinal is being convicted on the evidence of one uncorroborated story. This is not justice as we know it.

This is also the second trial for the same offence; the first one, the jury came out in favour of Pell's innocence, 10 to 2. However, that was not good enough for the Australian media and vicious LGBT community and the Australian legal system. So a retrial was enacted and this time with a new jury they all got the verdict they wanted. Remember also that elements in the liberal Catholic hierarchy were happy too. Cardinal Pell was orthodox and they wanted him as much as the Australian media.

So what chance does a Catholic leader have these days if he preaches with true charity and love and tries to save the souls of the poor misguided LGBT sufferers?

And there you have it, the media is so powerful, so full of LGBT activists and their supporters they can subvert justice, the government, and brainwash the population. If you say anything on sexuality that is in step with Christianity, you've had it.

Posted by Clear Vision Catholics at 04:36