It is astonishing what you discover browsing in the highways and byways of English literature. Who knew that the poet Percy Bysshe Shelley forecast the disastrous results of Padre Bergoglio’s papacy over two hundred years ago? I refer to his sonnet misleadingly entitled ‘Ozymandias’:

I met a traveller from an antique land

Who said: Two vast and trunkless legs of stone

Stand in the desert... Near them, on the sand,

Half sunk, a shattered visage lies, whose frown,

And wrinkled lip, and sneer of cold command,

Tell that its sculptor well those passions read

Stamped on these lifeless things, the hates, the hopes,

The hand that mocked them, and the heart that fed:

And on the pedestal these words appear:

“My name is Père Bergoglio, Pope of Popes:

Look on my works, ye Mighty, and despair!”

Nothing beside remains. Round the decay

Of that colossal wreck, boundless and bare

The lone and level sands stretch far away.

Shelley might have been a notorious atheist but self-evidently he had more foresight than a certain pope I could name! 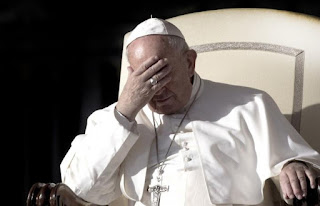 Posted by Clear Vision Catholics at 06:39