The Woke of the Devil 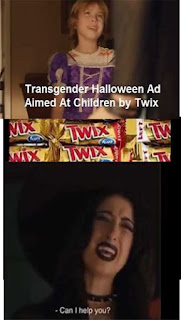 Last Easter we had Cadburys crème Eggs ad where two homosexual men dance about in a garden, one taking a crème Egg and put it in his mouth, the other then bit the other half, and the gooey sickly internal goo trailed between them as they parted. Now we have Twix, a double chocolate bar employing LGBT themes in a Halloween themed ad.

This Twix ad is not only callous and occult themed involving a young boy dressed as a girl, a black clad witch and what looks the supernatural murder of another young boy. So here we have an ad for a chocolate bar that doesn't mention ... ah the chocolate bar at all, just a small logo at the end. A boy of about seven is playing in a princess dress when he is visited by his new nanny, a black clad black lipsticked witch! They go for a walk and the boy in the dress is taunted by another boy for wearing the dress. "Hey you, you look like a girl, why are you wearing that." The witch nanny then summons up her magic power and murders the taunting boy. Yes, she blows him away.

Children who watch TV and are not homeschooled these days are at risk, at risk of being abused, at risk of being brainwashed, at risk of being socially engineered into being either homosexual or wanting to "change" their sex. The situation is so serious that one in three teens have an LGBT mental illness; a survey has shown that 35% of 14-19 year olds want to change sex and 13% think they are homosexual. Source: NHS Digital.

It is vital for the future of young people today that parents protect them from the media and keep them at home and homeschool them. During the Covid pandemic parents became alarmed for they had access through Zoom to what their children are actually being taught - and it’s very Woke and evil. The Woke of the Devil. In fact all Woke is of the Devil.