Are Trad Catholics the real Catholics? 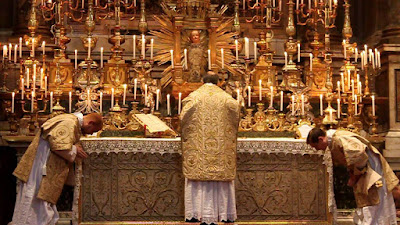 Around the globe there is growing trend towards Traditional Catholicism and it's not just the Latin Mass that attracts people, its authentic Catholic teachings on faith and morals that one finds at these Masses, because the two are linked. There has just recently been released a national survey in the USA regarding the views and beliefs of Traditional Catholics. Not for them compromise and fudge nor the false "accompaniment" of sinners and their sin by those who follow the Church of nice.

Please see below the table comparing Traditional Latin Mass goers and those who attend Novus Ordo Masses NOM. In the NOM categories some areas of dissent from Catholic teachings are so high that its truly shocking and why I never attend a NOM if I can at all help it. The facts are plain to see most NOM Mass goers do not follow basic Catholic moral teachings. Perhaps they are too influenced the teachings of the Mass Media instead?

Posted by Clear Vision Catholics at 06:54