Its ok to transgender but not to regret it as many transitioners do!
However, the media and the academic world do not want you to know this. 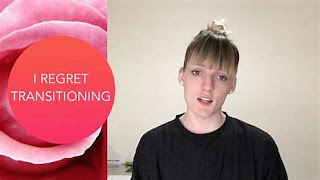 In 2015, James Caspian, an experienced psychotherapist who has for seventeen years specialised in counselling people considering a transition (from their gender at birth to the opposite gender), enrolled at Bath Spa University studying for an MA in Counselling and Psychotherapy. During the course of his work, and of his professional contacts with others doing similar work, he had discovered that a significant proportion of those who had “transitioned”, at a later date regretted their decision and sought to transition back to their birth gender. Not surprisingly, Mr. Caspian felt this was an important consideration for anyone (like himself) working with would-be transitioners. He proposed to Bath Spa to research this topic as part of his MA, and his proposal was accepted in December 2015.


However, when his proposal reached the university’s Institute for Education ethics sub-committee, it was rejected. The reasons given included the potentially “politically incorrect” nature of the work, and the likelihood of its being picked up by social media with detriment to the university itself, not just to Mr. Caspian.


Mr Caspian was astonished at the decision, feeling that for a research project to be censored for fear of what people might post on social media was completely contrary to the raison d'être of a university as a place where students and academics are free to discuss, dissent with, question, or examine critically material that may be challenging to someone, somewhere. He took the matter to the High Court, where his case was initially refused, though apparently only on technicalities. He did not let things rest there, but is pursuing the matter further.


His own account of the case may be read at: