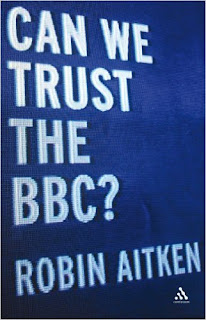 Can we trust the BBC?

The BBC has a reputation for fairness and impartiality, and because of this it is quite simply the most famous and trusted media brand in the world. It’s has a reputation for honest and accurate journalism. However, this book paints a very different picture of the BBC. Its author Robin Aitken is a former journalist and reporter and spent 25 years working at all levels in the BBC.


What emerges in this book is a BBC that is very biased indeed especially in areas of sexual morality, politics and religion. In fact Mr Aitkens argues that the Corporation has an all pervasive anti-religious culture and that this fact impedes its ability to be impartial. In reading this book one gets the impression that the BBC is especially pro-left politically, pro-libertine, pro-abortion and is above all anti-Catholic. But why should the BBC be so anti-Catholic for surely the BBC has no particular reason to bias against any religion? Yet the reason that emerges in this book is that its views on sexual ethics are diametrically opposite to that of Catholicism. In particular, because the Catholic Church speaks out strongly on the world stage against abortion, homosexuality and contraception she will always be singled out for attack. Aitkens highlights programmes like Woman’s Hour because its presenters and programming have been fervently in favour of ‘abortion rights’. He also states that ‘So strong is the BBC’s support for abortion that it can now be considered one of the Corporation’s ‘core values’1.


To work at the BBC, the ‘tribe’ as Aitkens terms its employees must sign up to a range of attitudes and opinions. These would be left-liberal but this does not mean being tolerant; they must be the opposite to ‘conservative’. With regards to BBC presenters making controversial statements, he states ‘It just not true to say that people who publicly espouse ‘highly controversial views’ cannot be BBC presenters. It is only certain controversial views which matter’2.


The number of BBC high-profile journalists who are left wing, out numbers the others by about ten to one. Impartiality regarding the BBC and politics? Hardly. In fact there seems to be a happy merry go round of left wing jobs for the boys between the BBC, New Labour and the Guardian newspaper.


Perhaps what should be of most concern to the Catholic Church is the BBC’s global reach with all its secular, pro-abortion, and anti-Catholic propaganda. It has the  BBC World News 24 TV on various international satellite systems, the World Service Radio, broadcast in 43 languages. The BBC website which also streams BBC’s British Radio and some of its TV to the world. All this is achieved with the help of the guaranteed licence fee, although there are some adverts on its international 24 hour news TV channels.


Can we trust the BBC? ultimately reads as one man quest to try and restore the dignity, respect, and impartiality to an institution the has become so biased, and yet remains  so powerful that it poses a danger to the truthful reporting of current affairs and world news, not only to Britain but on a global scale. We recommend this book to anyone who is concerned by the power and influence of the BBC. Can we trust the BBC to be fair, balanced and impartial? This book says no we certainly cannot.
References from Can we trust the BBC? 2007, 1 p.xxx, 2, p63

This article first appeared in CUT's Newsletter,  the Summer 2009
Posted by Clear Vision Catholics at 08:54