The Media the Election and Trump

The Media and the Stolen Election 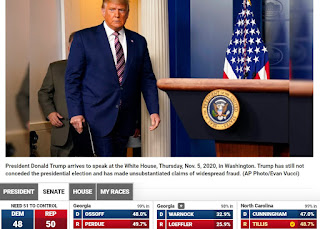 Whatever one thinks about Donald Trump there is no denying he was moving the most culturally and economically powerful country in the world back to pro-life pro-family values. While his support for LGBT issues left a lot to be desired, his style would not force these issues on traditional family values supporters. The media knew this as did the political establishment.

Throughout President Trump's tenure the democrats and the liberal media did all they could to try and bring him down. Two attempts to impeach him, both false, trying to find ways to make it impossible for Trump to work with Putin. Why? Could it be that Putin had put in place strong laws to protect Russia and in particular Russian children from homosexual and LGBT nonsense.

Now the election, where Trump was leading massively in all the swing states until the early hours of Wednesday 4th November's morning! When all of a sudden massive amounts of pro-Biden postal votes turned up in the 6 crucial swing states; not only that but Republican vote monitors were banned from verifying votes as is the norm; postal worker and honest vote counters saw vote counters filling in voting certificates for Biden.

The liberal media of course are dismissing all this, but make no mistake this is all about abortion and family values. The China deals that Biden has set up and the funds given to him and his son were not discussed; his son’s explicit sexual video (with a Chinese background) has been buried by the mainstream media. They knew that Trump was about to ban abortion in the States and therefore this would  have a strong influence on the rest of the world, so the liberal media, and the political establishment felt they had to stop Trump at all costs.

Posted by Clear Vision Catholics at 09:14