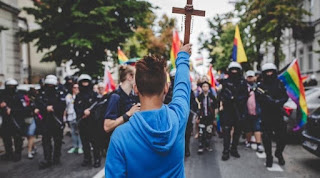 At long last someone is standing up the the LGBT tyranny. Polish 15 year old, Jakub Baryła stops a so called Pride Parade by holding up a Rosary and a Crucifix. Apparently they had blasphemous banners of Our Lady of Częstochowa with a rainbow halo. Western liberals like George Soros are ploughing millions into the Polish "Gay" liberation scene. 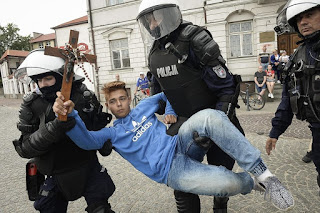 They took down Ireland and now they are going for the West's only truly Christian country left. Jakub said in an interview that he was inspired by the priest Fr. Ignacy Skorupko who in 1920 led the Polish army into battle against the Bolsheviks by holding a crucifix high so the troops could see it and follow him, he died a Polish hero having helped stop the invasion of his homeland.


Here is an interesting link regarding Public Discourse and Gender Dysphoria.

Posted by Clear Vision Catholics at 05:58