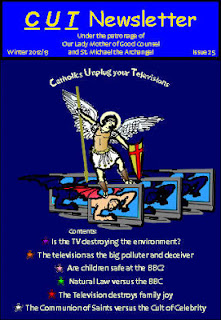 Is the TV destroying the environment?

There have been many studies that point out the detrimental effect the television is having on society. Violence on TV has had a direct effect on violence in society, while sex on television has sexualised people including young people and children. However, media studies professionals do not like the word ‘effect’ in relation to the media; they prefer to say that ‘people take media themes and make them their own.’ The word ‘ownership’ is the buzz word nowadays; for people to claim ownership of a media theme and to ‘run with it’ appears to make everything fine!
One of our themes for CUT’s campaign over the next year will be to make people aware of the damage being done by the TV to the environment, both spiritual and physical. The TV and the computer screen are all pervasive in modern life. You need them to do many things; to get better deals on goods and services and to buy on line is more often than not cheaper. Therefore damaging the High Street environment, but when they have destroyed the shopping centres what will happen to on-line prices? And what about those who do not have a computer, - mostly low income and in particular older people. The philosopher Habermas has coined the term ‘re-feudalisation of the people’, and states that modern society has caused this. The television and the computer have caused a feudalisation of society. Those who are on TV and the owners of services are the masters of today. The politically correct left-liberal elite brought up on a diet of Telly Tubbies and East Enders are today’s opinion formers. They have the power to control what people think and what they do. The television itself is a destroyer of natural resources. Not only does it drain the earth’s resources to keep it going; ten percent of the household electricity bill is spent when the TV and its ancillaries are on stand-by, let alone being used. It encourages an unnecessary materialism that does not help the economy in the long run, fuelling an external debt that runs to 9 trillion dollars1 in the UK alone. In fact countries that have the greatest addiction to the TV also have a large external debt, - the USA with 16 trillion, Germany and France with four trillion. The only way to feed this debt is ever greater growth. Growth is important; however, growth at all costs fuels materialism and environmental damage.
Reference - 1, United States Central Intelligence Agency, 29th of June 2011

In last winter’s newsletter we asked ‘Is there a Child Abuse Cover-up at the BBC?’ Now we know there was.

In our Winter 2011/12 newsletter we asked the question ‘Is there a Child Abuse Cover-up at the BBC?’. We did not have at this point any inside information or names etc. We asked this question because of the numbers of child abuse cases reported in modern secular society - running at 60 per day1 in Britain - and the number of celebrities and performers who had either been convicted and who had regularly visited the BBC. We also pointed out that there is a tendency on the part of the BBC to protect the homosexual community; studies have found a higher than usual incidence of child sex abuse among homosexuals.  The Family Research Council found that by looking at the reports produced by studies in the Journal of Child Psychiatry2 and the Medical Aspect of Human Sexuality3 and many other academic studies they came to the conclusion that ‘Male homosexuals commit a disproportionate number of child sex abuse cases’.
References:
1, NSPCC figures for 2010/11.                 2, Watkins and Bentovim, p. 315. Journal of child Psychiatry 33 (1992)
3, Robert L. Johnson, "Long-term Effects of Sexual Abuse in Boys," Medical Aspects of Human Sexuality (September 1988):

Posted by Clear Vision Catholics at 02:41