Disney and Netflix are losing subscribers

The obsession with Transgenderism in the media, in schools and now even in the Church is getting out of hand. Nowhere is safe, schools, church, TV, films have virtually all fallen. We tried our best at CUT to bring to our readers’ attention the media's role in this and many have listened and thrown out the TV, have homeschooled and found themselves an orthodox and/or traditional parish. Lionel Shriver in her Brave New World article for the Spectator has put it well when she says

Television programmes such as Orange is the New Black had a transgender character, while Transparent featured the phenomenon as its central premise. 'Transgender Day' was born. Early childhood education was revamped, so that six-year-olds were instructed that they could choose to be a boy or a girl or something in between.

There's an element here of prurient voyeurism. We're bored with hetero sex, which has become too permitted, and now carries a whiff of the unhip. We're bored with gayness. We need a new fixation. ... The population signing up for sexual 'reassignment' has gone through the roof... 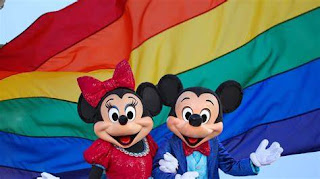 However, news that Disney is imploding and Netflix are losing subscribers by the bucket load is
surprising many. Both these entertainment companies chose to go down the pro LGBT route. In addition, as you know, well at least the Main Stream Media keep telling us that everyone wants a Rainbow flag. Well it's simply not true, we may be compassionate to all who find themselves confused after being brainwashed for so long, but when most parents find that their children are not safe any longer when being left in front of the telly to watch cartoons, will they then go to a Disney theme park that has a Rainbow flag decked Micky Mouse with lots of his 'Trans' friends? Or will they literally pull the plug on these entertainment companies?

Disney Florida recently lost its self-governing statutes; yes, Disney had the power to act almost like its own state with the ability to raise its own taxes, build its own infrastructure, almost run itself like a country. However, the Disney woke era went too far in pushing sex-change ideologies on children, so that the Catholic governor of Florida, Ron De Santis, signed a bill stripping Disney of its self-governing status. It's about time someone stood up to the Disney purveyors of evil on children. With same sex kisses in Star Wars and a purple haired general in an evening dress brow-beating "a stupid fly boy" male lead, things were becoming unwatchable. Star Wars, as have many films made by Disney, have really lost their way.

Perhaps it's not surprising when they have a president of General Entertainment Content who wants at least 50 percent of characters to be LGBTQIA and racial minorities. This is not surprising, for Disney corporate president Kath Burke says she has one transgender child and one pansexual child; poor children, brought up on a weird diet of strange cartoons and attitudes. Perhaps this is one case where social services should remove the children, for their safety?

Disney and Netflix along with most of the main stream media are losing credibility and viewers; however, not fast enough I'm afraid especially for the poor 5,500 children on the NHS sex change waiting list.  This is tantamount to child abuse!
By Prayer Crusader St Philomena
Posted by Clear Vision Catholics at 09:18