Spiritual Combat and the Prayer Crusader 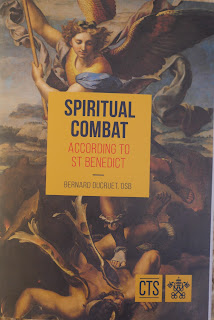 The Catholic Truth Society (CTS) has recently published a booklet called Spiritual Combat according to St. Benedict. Raphael’s painting of St. Michael overcoming the devil appears on the cover. All CUT members are asked to be prayer crusaders, and all are familiar with the image of St. Michael, sword or spear in hand, triumphing over a fallen and sprawling Satan. Each of us has our own chosen Saint or Blessed who fights alongside us, with reference in particular to satanic influence over the media and the entertainment industry. This booklet, written by a French Benedictine monk, explains how such spiritual combat must be undertaken.

Father Bernard identifies three “breaches” in the integrity of the soul, through which Satan can attempt an entrance in order to disrupt and weaken the spiritual life of each human person. The “breaches” he also calls “wounds”, areas of weakness and vulnerability. All three breaches (unless closely watched and strongly defended) allow Satan to seize on and distort desires which are in themselves natural and indeed essential to human nature and human living.

The first breach relates to the need for well-being, for pleasure and security in such things as food, shelter, comfort and sexual relationships. In his encounter with our Lord in the desert, Satan tried to exploit this breach when he tempted our Lord to create bread for himself after his forty days’ fast.

The second breach relates to the natural human desire to be recognised, loved and approved, - in early life by parents, later by wider family, friends, work colleagues, neighbours and those with whom we share a culture. Thus we form and develop relationships of love and positive regard whereby we support and are supported by others. Satan seeks to twist this into a desire to be admired and held in high esteem for our own dubious profit and benefit. Satan suggested to Jesus that he throw himself down from the highest pinnacle of the temple in order to gain the acclaim of crowds of people who would see the angels coming to save him from harm.

There is a human need to create, to plan and to organise. This is at the root of all human endeavour, from making a shopping list to designing a cathedral. The breach which Satan here seeks to exploit is the need for control, for power, for domination. He showed Jesus the whole world, spread out around and below a high mountain: “All this can be yours” he said,  but Jesus again rejected the temptation.

Spiritual combat consists in discerning the perversions that Satan is attempting to work in us, and indeed has already worked to some extent, and in redirecting our desires to God and to the unselfish love of the people around us.

In the second half of the booklet, Father Bernard examines factors which make spiritual combat more difficult for us. The influence of the culture in which we live, and of negative incidents in individual lives, can weaken the soul’s ability to discern what Satan is doing in the soul. Father Bernard goes on to consider the nature of Satan, the Adversary, the Divider, himself. He “deceives, worries, divides, separates from God and others...” and “divides the heart against itself”. Within many areas of life, Satan does little, since he need only “complacently watch the agents acting on his behalf”, among whom, as prayer crusaders know, are those dominating the mainstream media, the entertainment industry, and huge swathes of the internet. Among monks, however (the author himself having been a monk and indeed Abbot of his community for twenty years), these “agents” can make little headway, so Satan sends “a hundred devils” to tempt the monks in far more subtle ways. Since prayer crusaders often live lives withdrawn from the more obvious occasions of sin and are readily on their guard against the temptations of mainstream culture, they may perhaps be compared to monks and need to be prepared to search for satanic influence hidden in unsuspected areas of their lives. Essentially, spiritual combat is conducted in each individual heart, where lie “the roots of doubt, despair, indifference, violence or hatred”. Satan can only enter from outside, and may reach deeply into the individual, but it is possible (often with another’s help) to discern which breach he entered by. The Holy Spirit, by contrast, operates in the depths of the heart where “his peaceful action pacifies, purifies, enlightens and builds up”.

Spiritual combat is carried out by means of prayer, the sacraments (especially the sacrament of penance), works of charity, and contemplation.

Posted by Clear Vision Catholics at 02:54