January 18, 2020 (LifeSiteNews) – In his first public appearance since going into hiding over a year ago, Archbishop Carlo Maria Viganò joined other prominent Catholics in Munich today in prayer and protest against the German Episcopal Conference and its President Cardinal Marx. The Vatican whistleblower joined Catholic laity to oppose the German prelates’ plan to embark on a “synodal path” that critics say would create a “new church” that departs from Catholic teaching on priestly celibacy, contraception, homosexuality, and fornication. read more here

Benedict is defending celibacy from the media, not from Francis

Cardinal Sarah: Claim That Pope Benedict XVI Did Not Co-Author Book is ‘Defamation’
The cardinal's words are in response to a Vatican correspondent claiming on social media that “a source” close to Pope Benedict XVI had told her that the pope emeritus did not write the book with Sarah, or give authorization for its publication.
Catholic News Agency
VATICAN CITY — Cardinal Robert Sarah said Monday that claims Pope Emeritus Benedict XVI did not co-author with him a new book on priestly celibacy are “defamations of exceptional gravity.” - National Catholic Register. read more here 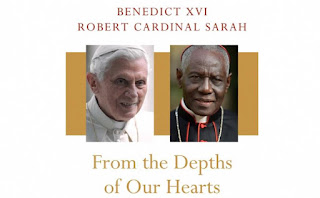 Posted by Clear Vision Catholics at 08:14