Antifa are the new Fascists 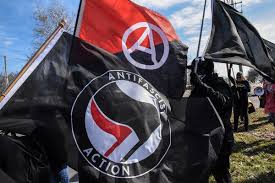 Antifa has a new offshoot, Anti-Pedophobe Aktion, dedicated to normalising child molestation and removing any stigma attached to it.  They, and their comrades in Resist (the anti-Trump umbrella body) and Black Lives Matter, now produce banners carrying their logos alongside the Anti-Pedophobe Aktion and North American Man-Boy Love Association insignia.  The company they keep, and the causes they champion, show just what kind of people these alt-left are, and just why decent people need to condemn them and ask our MPs for political action against them to disrupt their activities and ban international speakers.
The BBC, meanwhile, refuses to report on the campus bombings and use of these banners at public protests in America, or the fact that the Antifa ‘brand’ is used by those threatening violence if certain speakers are allowed to address student societies or to lecture at British universities; indeed, a reporter claimed that Antifa had not performed acts of terrorism without that claim having been challenged, and had the clip repeated on news bulletins for hours one afternoon.

Please see the article Whitewashing the Black Bloc by the same Prayer Crusader.


Posted by Clear Vision Catholics at 06:42