THE TRIUMPH OF ISLAM

“That England that was wont to conquer others
Hath made a shameful conquest of itself.”
(Richard II, 2:1, ll. 65-6) 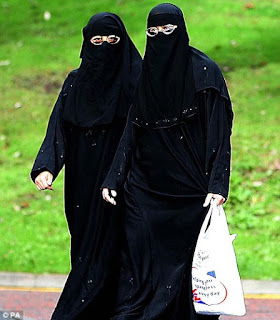 Sorrowful tramp of boots on sanded streets:
In winter’s grey, sad companies of men
Manhandle Churchill’s coffin with dull beats
Of drum and growling brass. Grown men and children
Sag heads and make their peace, and St Pauls greets
The last of England, mourned in fen and glen:
The state he served, those thin wan faces tell,
Has hollowed like the booming, death-march bell.

Mere thirty years from Pericles’ repose
Refulgent Athens died in Sparta’s fist.
In Ludgate Hill foxish lawyers at their windows
Watched Churchill pass and since have ticked their list
Of state-upturning statutes which in prose
Have sundered epic: mealy “one-world” grist
Which Albion’s beaches ramped with unjust laws
Bringing the millioned umma to these shores.

That stocky soldiery, those weeping folk,
That stark January day, in thirty years
Fast shrivelled to an untamed tribe bespoke
On sink estates of pierced lips and ears,
Their pride as great-strength oxen at the yoke
Neutered by those lawyers’ brats whose fears
Of nation-love have brewed with other spawn
A curdled rainbow in a sullen dawn.

On Sundays Finsbury Park is loud with trade,
Hijab and djellaba command the scene,
A church where once the liturgy was prayed
Disgorges carpets of a Turkish sheen,
The mosques are brimming, that which kept the shade
Tide-like swamps suburbs with the muezzin’s keen;
Soon, time-old villages, deep-valleyed towns,
Will startle as that cold wave slaps and drowns.

The crop-rich fields and gorse-bedazzled moors
Enfold two thousand years of Christ-mens’ cells,
Those chapels, caves, where what’s eternal pours
Through being, fruitful as baptismal shells:
All lost; a rotted people slamming doors
Against its past must pander to the yells
Of ghazis who in church and manor halls
Gouge mihrabs in those age-encrusted walls.