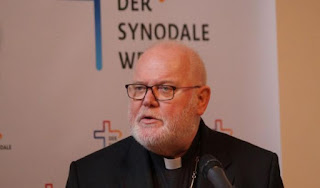 A group of some twenty prominent German scholars, journalists, pro-family activists, and representatives of faithful Catholic organizations have come out publicly to “oppose” the German bishops’ “synodal path” for its dissent from Catholic teaching on celibacy, clerical authority, the ban on female ordination, contraception, cohabitation, homosexuality, and gender theory.
These faithful German Catholics are rightfully terrified that the German bishops' plan will "Protestantize" the Catholic Church and "destroy" the substance of the Catholic Church in Germany.
These brave warriors are calling on Catholics around the world to join them in resisting the bishops' plan.
Please sign this petition in support of these German Catholics who wish that the Church in their country remains faithful to the Universal Church's 2,000 year-old structure, doctrine, and discipline.
Let us support the faithful part of the Catholic Church in Germany to preserve the Catholic Faith inviolate and intact, as it has been handed down to us from the Apostles.
Much is at stake, and prominent Cardinals such as Gerhard Müller, Paul Josef Cordes, Walter Brandmüller, and Rainer Woelki have already warned that this synodal path might turn into a schism.
But, why does this matter? It's happening in Germany....
Because, this synodal path in Germany will affect the Universal Church. And, truth be told, the German Catholic bishops hold a lot of sway in the Universal Church.
Thus, we all have a responsibility to call upon the Catholic hierarchy and organized laity in Germany to remain faithfully Catholic.
We are one Mystical Body of Christ, and if one limb is sick or weak, it needs the support of the other members of the Church.
Against the erring synodal path of the Catholic Church in Germany, Professor Hubert Windisch, a retired professor of pastoral theology, has written the petition text, which he has called "We Remain Catholic -- A Call to Resistance Against the synodal path."
Now, please join your name to the signatories listed below the text of the "Call to Resistance," and support this appeal. Sign the petition here:
https://lifepetitions.com/petition/support-faithful-german-catholics-who-oppose-dangerous-synodal-path-run-by-german-bishops
And, please, keep the Catholic Church in Germany in your prayers. Thank you!
FOR MORE INFORMATION:
The German synodal path is being organized by the German Bishops' Conference and the Central Committee of German Catholics (ZdK). It had its first official meeting at the end of January in Frankfurt and will host its next in September.
At its first gathering, a majority of the 230 synodal members voted against a proposal that only those votes will be passed on to the general assembly that are in accordance with the Church's teaching.
Moreover, the preparatory documents of the synodal path indicate clearly the aim of dissenting from the Church's sexual teaching, her ban on female ordination, as well as her Apostolic discipline of priestly celibacy.
**Photo Credit: Rudolf Gehrig / CNA Deutsch**

Posted by Clear Vision Catholics at 09:14