Save the 8th amendment 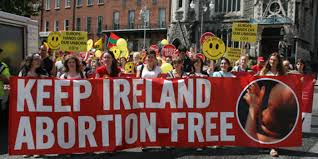 What is the referendum in Ireland about? Well, it is about light v darkness. How did it come to this? What course did it take? I will try to answer.
In 1983 Ireland had a very divisive - I mean very, very divisive - referendum and referendum campaign leading up to the referendum. I remember it well as I campaigned on the pro- life side, with a truck load of pro-aborts hurling abuse at us when they came across us. The two main pro-life groups at the time were the Society for the Protection of Unborn Children (S.P.U.C.) (which I campaigned with) and the Pro Life Amendment Campaign(P.L.A.C.). There were many liberals who wanted to introduce abortion to feel ‘with it’ among the nations that had introduced abortion. Thankfully Ireland was a more Catholic country then than it is now, and there was a sizeable amount of politicians who were against abortion. There was at that time scant protection for the unborn in the law, only an English law dating back to 1861 which was somewhat vague. So it was decided to put it to the people and to hold a referendum.  As I said, it was a very acrimonious debate. And no surprise, with the media constantly against us slinging mud at every turn.
Despite this the people through the grace of God decided that they did not want abortion and said a big NO with two thirds of the people voting against abortion. Thank God. The people had spoken. The constitution was amended and article 40.3.3 was inserted into the constitution, that ‘the state acknowledges the equal right to life of the unborn with due regard to the right to life of the mother’. I’m quoting this from memory. To put it basically the unborn child was seen as a person with equal rights. The only time when a pregnancy could be terminated was if the mother ‘s life was in danger, as this was not the direct intentional killing of the unborn but giving the mother the necessary life saving treatment that she needed where the unfortunate side effect of this is the death of the baby. So this became law and it could not be removed by politicians (praise God) as the constitution can only be changed by the people in a referendum. So basically the whole thing backfired on the pseudo liberals. They could not change it now. From the pro-life point of view Ireland was the jewel in the crown with its prominent protection of unborn children. And a lot of people didn’t like this.
This  was the 8th amendment to the constitution. And is known as the 8th amendment or in current debates is commonly referred to as the 8th.

Posted by Clear Vision Catholics at 05:43