That the new president of the United States has found a catch phrase that everyone is now using is at last a bit of good news. We've been bombarded with words like homophobia, "Gay" rights (as if to oppose this is to be anti-happy or something) etc. etc. However, there is also a phenomenon we believe to be "neglected news", for example the millions of pro-life people who take part in or the millions who took part in the  pro-natural family march in France and Italy - only last year 2 million Italians took to the streets of Rome. It was covered on most Italian TV stations; however, unlike the "Gay Pride" parades that take place all over the western world there is no coverage in other countries.


EWTN and the real news


EWTN bravely throughout the long dark years of the Obama administration faithfully had camera crews covering the March for Life events when no one else did. In the lead up to the presidential election they had two weeks of a Priest for Life (EWTN sponsored priests organisation) priest celebrating their live Mass on TV and giving some of the most pro-life sermons I've ever heard. So let's give EWTN some credit! EWTN's World Over Live with Raymond Arroyo's interview with Donald Trump may have just tipped the balance of Catholics away from Clinton and furthered the pro-life cause, saved unborn children - they need a pro-life president. However with all Trump's speeches about Fake news and at least doing something about abortion, he is in fact pro-same-sex marriage. So let's not get too carried away by Trump although Clinton becoming president doesn't bear thinking about.


Putin and the Media


Every wondered why the US and UK's media are trying to put a barrier up between Donald Trump and Vladimir Putin? Every wondered why the British media is so anti-Russian? After all it's now a far more Christian country than the UK?
Ever wondered why there is so much about doping in Russian sport and not much about it in other nations' sports? It's quite simple: Putin's Russia is (along with the African countries) the only Christian countries that will not allow pro-homosexual propaganda. They are the only ones who will tell the truth about homosexuality and child abuse! 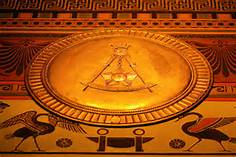 
In another frightening turn of events a Freemason ceremony in Canterbury Cathedral took place last week on the very day that England and Wales was reconsecrated to the Immaculate Heart of Mary in Westminster Cathedral. The "Archbishop" of Canterbury is only too ready to accept the £300,000 from Britain's Freemasons to celebrate 300 years since the foundation of the first Masonic lodge.

Posted by Clear Vision Catholics at 10:06