The Media and the War - 23rd Crusade of Prayer

First let me say I am in no way supportive of the Russian invasion of the Ukraine, this can hardly be described as a just war. The destruction, the bombing, the killing are just appalling. However, who is to blame, is it just Russia? Have the west, or NATO, the EU or the media any guilt here? Well, all are to blame let us not mince our words; the western governments and in particular the western main stream media have been baiting Russia for years. Why? After all the Soviet block is long gone and the cruel communist ideology has been replaced by Orthodox Christianity; Russia’s leader Vladimir Putin (for whatever reasons) has been promoting and supporting the Church in Russia, and in many areas Russia has come to resemble a western Christian country, if not a democracy. 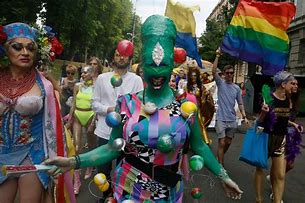 Well I believe there are many reasons why the west do not want this form of Russia to succeed. Russia is a very big country, it has enormous oil and gas supplies, a huge military and of course Nukes. But these are not the real reasons (or rather not the main reason) the west and in particular western main stream media hate Russian. Russian Christianity and its restrictions on the homosexual and LGBTQ+ promotion are an important factor in Western hatred if Russia. This and its conservatism in family matters. However, why has Russia invaded the Ukraine, a sovereign nation?

Some of the Ukraine's territory was given to it by the Soviet Union during the communist era; these are actually Russian speaking lands and include the Donbas and the Crimea. When the Soviet Union broke up in 1990 Ukraine declared independence and along with the Russian speaking areas formed modern Ukraine. Gorbachev agreed to a unified Germany being part of NATO provided the other former countries of the Soviet Block remained neutral or unaligned. This did not happen and most of the countries joined NATO, which Russia believes to be a direct threat.

In 2014 the pro-Russian PM Viktor Yanukovych was over thrown during the Orange Revolution (the Yanukovych election was pronounced to be fraudulent by later courts). The Orange Revolution has is claimed to have been fuelled by the CIA, Soros Foundations and the anti-Russian media, both in the Ukraine and abroad.

Vladimir Putin claimed that the neo-Nazi Azov Battalion were active in suppressing Russian speaking areas in Eastern Ukraine. They model themselves on the German SS of the Second World War. Therefore Russia moved into the Crimea and supported the Russian separatists in the Donbas. In 2021/2 Putin claimed the there was indiscriminate killing of ethnic Russians by the Azovs.

Therefore, Putin’s reasoning for the invasion of the Ukraine was that Ukraine was about to join NATO, and the oppression of native Russians particularly by neo-Nazis.

Again, let me say that although one can understand what Putin is saying, this still does not excuse Russia's invasion of the Ukraine. However, to listen to the media and the actions of western Governments one would think we are now at war with Russia. 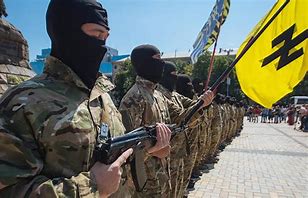 We are not at war with Russia!

So when Russia invaded the Ukraine the west went into Russophobia craze mode, and Russian Blue cats were banned from cat shows, Russian music was taken off concert programmes, the owner of Chelsea football club was sanctioned, his club taken from him and his bank accounts frozen, and yet we are not at war with Russia! RT (Russia Today) has been blocked by most search engines and You Tube etc. Hardly supportive of free speech and looking at the situation from all sides.

Why is the west not promoting peace talks?

It is clear that the western media wants this war, the media made up of
numerous players such as Stephen Fry, Elton John and many leading homosexuals have been egging the Ukraine on. Where are the cries for peace talks on the BBC or CNN or numerous other western media outlets? Why is President Biden not calling for peace talks, or Boris Johnson? There is no talk of peace. Just macho rhetoric, Biden trying to look tough to compensate for his own failings. It is clear that NATO still sees Russia as the enemy.

Therefore, it is clear that given that there has been no attempt by western leaders to foster peace talks, western governments and the main stream media want the total humiliation of Putin and Russia, they do not want a peace agreement. The Woke Western entertainment industry want Russia as it is today destroyed. All the tactics of Critical Theory have employed:

·                     Russia alone is guilty for this war ~ However, Putin's request for assurances that the Ukraine does not join NATO were ignored by Biden and other Western Governments. The invasion of Ukraine will be a disaster for Russia, the Ukraine and the world.

·                     We support the Ukraine because it aspires to freedom and "Western Values" ~ Richard Moore the head of the Woke MI6 recently tweeted "...we should remember the values and hard won freedoms that distinguish us from Putin, none more than LGBT+ rights. So let's resume our series of tweets to mark #LGBTHM2022. In recent years, Kiev has had LGBT "Pride" events with all the attendant lewdness and disgusting displays.

·                     Russia commits atrocities -  western media repeatedly say that the Russians are "targeting" civilians, schools, hospitals etc. but to do this is counterproductive and Russia claim that the massacre at Bucha was only reported four days after the Ukrainian army arrived; they are saying it was staged?

·                     The Ukraine has suffered small losses but the Russians are being devastated ~ the media is full of dead Russian tanks and endless videos of Russian helicopters being destroyed but this is not the full picture. This use of western equipment is certainly making arms manufactures rub their hands with glee -  but who will pay for it? Well we all will.

This will not end well.

There seems to be a feeding frenzy of hate among the west's leaders and the media here are some examples... The extremely stupid British Foreign Secretary Liz Truss encourages Brits to go the Ukraine and fight and provokes Putin into reminding the west that he will use nuclear weapons if the west gets involved directly in the fighting and put Russia's nuclear deterrent on high alert. The British media has encouraged young men to fight in the Ukraine; they have little experience and are being thrust into the front line, little more than cannon fodder, many have been killed, little or no news reports.

All the indications are that this will not end well for Russia, the Ukraine, the west and even Africa who rely on Ukraine grain the feed themselves. No one wins during a war; civilisation takes a backward step. The western media really have shown themselves to be bloodthirsty in their reporting and have failed to encourage peaceful talks. We can only hope that peace will come despite all of it; perhaps the Pope's consecration of Russia, the Ukraine and humanity will have some effect, even if he did not do it as Our Lady of Fatima requested.

We have decided to Stage our 23rd Crusade of Prayer for Peace in the Ukraine over the Easter period 2022, and that the Media will not cause a World War.
Posted by Clear Vision Catholics at 01:30