Blasphemy and pornography In the film Benedetta 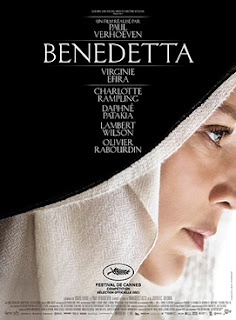 It is almost impossible to find good pro-Christian mainstream films in modern cinema. In addition, when they do talk about Christianity and especially Catholicism it's either to mock or to disparage and to blaspheme. Pathé's new film Benedetta is a case in point. The film by Dutch director Paul Verthoeven, who has a penchant for sex and violence in his films, carries on down his sordid path and now adds extreme blasphemy to his repertoire of evil.

The film is loosely based on a 17th century Catholic nun and mystic who, according to the film, had a lesbian affair with another nun. The film contains lesbian sex, nudity and even the use of a statue of Our Lady in a sexual way! The scenes are so shocking and explicit that some reviewers say it is no more than pornography. And yet it only has a 12 rating, therefore exposing children to homosexual pornography and at the same time smearing Catholicism with its visuals of the 17th century Church using all the cinematic tricks to falsely portray the Church and cause as much damage and hatred as possible. Its director has already been nominated for the Palme d'Or and also of course for the Queer Palm for the film at the Cannes Film Festival.

This is pornography writ large, this is hate speech in the extreme, designed to make Catholicism hated and mocked whilst at the same time titillating. It is a nasty exploitive piece of "Gay" propaganda masquerading as truth and art. Please sign CitizenGo's petition to have the offensive scenes removed.

Posted by Clear Vision Catholics at 03:45