The Communion of Saints - St Philomena

The Communion of Saints versus the Cult of Celebrity 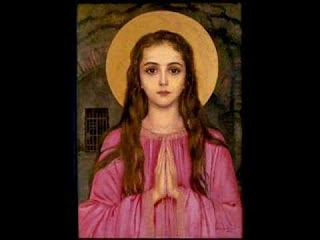 Nothing is actually known about St Philomena, there are no historical records. She is the only saint to have become known by her intercession, from which there has been an endless flow of miracles. These powerful intercessions have continued during the last two centuries, so powerful that many Popes had a great devotion to the little miracle worker, particularly Pope Gregory XVI, Leo XII, Pius IX and Leo XIII. But let us go back to her discovery.
In 1802 in the catacombs of St Priscilla the remains of a young woman were found. It was covered in stones and had symbols that indicated it was the body of a martyr named St Philomena. But why wait almost 1700 years before she became known? There were many factors which could give us good reasons why God waited until this point in time to reveal this particular saint. The Napoleonic wars were raging, the result of the French Revolution and in turn the result of the so called Enlightenment. Philosophers in France and Germany were putting man at the centre of the Universe and not God. In the 19th century materialism was becoming ever more prevalent and people were being led away from the Church.  After the discovery of her remains and the symbols which accompanied her she was catalogued and forgotten. However, In 1805 Canon Francis de Lucia of Mugnano, Italy, was in the Treasury of Relics in the Vatican and as he approached the relics of St Philomena he was struck with spiritual joy. He was allowed to erect a shrine to her in a chapel in Mugnano. There then followed miracles and cures and her fame spread throughout Italy and abroad.
One of St Philomena’s strongest devotees was St John Vianney who gave her constant praise for the numbers of cures achieved at her intercession. Another was the Ven. Pauline Jaricot who was miraculously cured by the intercession of St Philomena and named her as Patroness of the Living Rosary.
She is perhaps more than anything needed today. A youthful saint for today’s youth led astray by the media, the television and pop culture celebrities who believe that virtue is outmoded, and that childhood innocence must be destroyed. O glorious St Philomena, pray for today’s young people who are often given a poor start in life by the bad examples of rock and pop celebrities 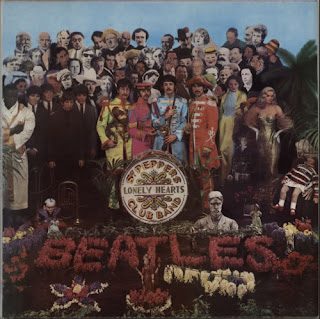 During the last half of the twentieth century and continuing into the new millennium one of the most powerful influences on youth has been rock and pop stars. This is very sad for by their example, living lives of dissipation and excess, they have proven themselves to be the least qualified to be leaders and teachers of the young. Many believe that with the TV they have created havoc for many youngsters. The songs were often banal, sometimes ‘clever’, but hardly ever had any Christian reference. It’s almost as if the last two thousand years never happened. Their songs were to drugs, sex, materialism and even paganism. The Rolling Stones wrote a hymn to Satan calling it Sympathy for the Devil in 1968. They had a number of hits like Jumping Jack Flash selling millions around the world. There music and images were brought into homes by the TV with shows like Top of the Pops. The Beatles at the height of their fame produced their influential Sergeant Pepper’s Lonely Hearts Club Band LP which had a picture of the Satanist Aleister Crowley among the celebrities on the album cover. Jimmy Page of Led Zeppelin was a devotee of Crowley’s and even bought his Boleskine House on the shore of Loch Ness where he performed Crowley’s magical rituals.
The three bands named above were possibility the biggest in the history of rock and pop music. Their influence was immense, sidelining Christian values with a heavy beat and a rife from their guitarists. They were heavily into drugs, the occult or eastern mysticism.
As sixties pop turned to the rock of the 1970 Sadomasochism raised its ugly head with Alice Cooper (a man) whose stage act involved being hanged. When TV campaigner Mary Whitehouse complained she was ridiculed by the large majority of the youth of the day; led by rock bands like Deep Purple whose song Mary Long mocked her attempts to restore common decency along with Lord Longford.
It no comfort to a Christian that many of the rock and pop stars died from their lifestyles with drugs and alcohol taking its toll of many leading stars
Today the rock and pop industry continues its glittery round of dissipation with their own award ceremonies on MTV. These days it’s the turn of women stars to flout convention and cause scandal and lead young girls astray. The Madonna and Britney Spears kiss on stage at the MTV award ceremony reverberated around the world, more with admiration for their bravery than admonishment.
Even where Christianity does exist in mainstream rock and pop it is so heavily diluted as to be dangerous leading many astray rather than affirming the faith. One would expect that a so called Christian band from Ireland, U2, would be able to withstand the onslaught of materialism and politically correct liberalism but no, for although three-quarters of them were baptised Catholic, U2 are more in tune with liberal Protestantism than the healthy disciplines of Catholicism. Constantly wearing their hearts on their sleeves they champion Amnesty International, now a leading supporting of abortion.
One cannot write a piece on the pop world without mentioning the biggest star of today, Lady Gaga whose promotion for her latest CD Born that Way involves fetish laden and sexually explicit photos of herself. Power without responsibility – you bet yah
Posted by Clear Vision Catholics at 04:47