Who cares? Why care? 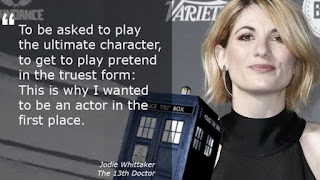 The character Dr. Who is to be played by a woman. Does this matter? As the programme is the BBC's flagship show for children, young adults and science fiction fans of all ages, and is sold for broadcast across the world, it must be recognised as a significant transmitter of values; but what values does it transmit? The programme has already introduced its predominantly young audience to homosexual themes in its storylines – one teacher commented that, when they were playing, the children in her school all wanted to be a particular gay or bisexual character – in keeping with the Corporation's long-term project of normalising the queer. This new development is another step in that old project. The concept of Dr. Who is, metaphysically speaking, one of essential or substantial continuity coupled with accidental or incidental change. To have the title character played by a woman, therefore, amounts to an assertion that gender is not an integral element of personal identity; it is merely a surface detail. This goes even further than the transgender agenda which asserts that gender is integral to identity, but is not constrained by biological sex. It may be understood to mean the abolition of gender, but what that really means, or how it will be taken, is more difficult to determine.

It may be understood to mean the abolition of (or, at least, an aspiration to abolish) the social meaning of sexual difference, which would entail an acceptance of the externalities of the male or female body but a rejection of any notion that any social rôle is determined by sex. This has clear implications for clerical and religious life in the long term as the rationale for the male priesthood and the spousal character of the nun's vocation (already undermined by liturgical change) would cease to be comprehensible within a disgendered frame of reference. The concept of marriage, even in a natural let alone a sacramental sense, would also be under threat.

Then again, it might be understood to mean that there are no objective reference points or criteria for the externalities of the person, they may simply be moulded into an expression of a subjective perception of identity. This is an extension of current practice; it amounts to a rejection of the Christian understanding of the person as a totality in whom the soul gives the body its form as its own actualisation in corporeal matter, and of the biblical teaching that our first parents were created as gendered beings with Eve created from the side of Adam. If our bodies are not intrinsic to ourselves how real is the reality we experience through them? That way lies the madness of solipsism and fantasy.

The programme's young viewers will similarly absorb these ideas without articulating them intellectually. They will go on to form their own opinions and take philosophical, theological and political positions on the basis of the things they see and hear now; this will form the substance of their subconscious minds.