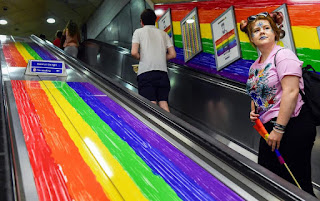 It is now fifty years since the legalisation of homosexual acts and to celebrate London has just had its biggest "Gay Pride" parade ever, the biggest in Europe. Busses and taxis were decked out in rainbow colours, and the whole panjandrum was sponsored by Barclays Bank as the "Headline" sponsor whose logo was suitably re-coloured rainbow. "Gold" sponsors were Tesco and Starbucks and among the lesser sponsors were Amazon, Vodafone, etc the list is just too long to give here. And like Boris Jonson before him the Muslim mayor Sadiq Khan also took part, so much for his principles as a Muslim. 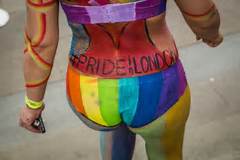 
Over a million people lined the streets; many young families were present, for this is what passes for a family occasion these days. They saw of course near porn on the streets as men, women and trans in various states of undress, or dressed to accentuate their private parts and parade their shame in public as their so called pride to seduce all and sundry. So homosexual acts, and transgender mutilations have now gained almost the total domination of modern Western culture. Soon to even hint that you find all this disgusting will mean that you could be arrested for hate crime.

Largest number of paedophiles among homosexuals
However, it is the LGBT community that has a disproportionately large number of child abusers. One report says about a third of all "Gay" men had had sex with an underage boys  http://rense.com/general24/reportpedophilia.htm The evidence is overwhelming but under reported and some web browsers even block this information. Nevertheless it is our duty to expose this and before God as these acts between adults are gravely forbidden how much worse it is to lead a child into sin.

Britain's First Man to give birth


Carefully orchestrated to tie in with this fifty year anniversary was the news of Britain first pregnant man to give birth, - however it's not really a man but a woman who has been legally designated a man. However, she has not yet had her breasts removed or her ovaries, but that will happen soon! 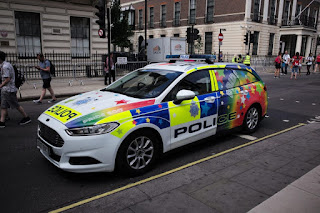 Homosexuals rule the lawmakers
Homosexuals seem to rule the media which will not report on the close link between homosexuals and child sex abuse but they do want homosexuality taught in schools and every scout group will have homosexual lessons. Homosexuals have the police, the law makers, the schools, the Government: there is nothing left, just the Church - and they will be coming to get us soon!
Posted by Clear Vision Catholics at 10:42