THE BBC AND CULTURAL TOTALITARIANISM

Despite the news reported in the Telegraph that there have been 157 cases of child abuse against BBC employees and former employees since the Jimmy Savile case broke last autumn, there has been very little reported about this by the BBC themselves. It’s not surprising for the BBC has officially gagged its employees. However, is this not legitimate news? But like all bullies everywhere, whether for cultural or self-interest reasons they are not afraid to browbeat others. They continue to bash the Catholic Church whenever they can, from the Vatican to local Churches, and yet most of these stories are very minor compared to their own problems. They have very clear cultural core values to maintain and to give airtime to their own corrupt practices and paedophile cover-ups would be damaging to these core values and  would undermine their idea of what society should be. This is a tried and tested practice of the Communist system and is called agitprop, using the media to brainwash the people and then maintain the values, beliefs and knowledge that they approve of. Today the BBC maintains a form of Cultural Totalitarianism; it supports, for example, homosexuals, Gay Marriage and abortion and at the same time it utterly dislikes Catholic moral teaching, that homosexual acts are grave (mortal) sins and so is abortion. Therefore it will attack the Church, blowing out of proportion any problems in the Church while ignoring its own problems and those in sections of society its supports such as the homosexual ‘community’ and child abuse there. This is very similar to tactics used during the Protestant Reformation; for example, the German Princes who supported foul mouthed Martin Luther did not do so for religious reasons but for secular, some because they wanted a divorce to marry their mistresses, - just like Henry VIII.

Enough of the BBC’s indulgence of their Celebrity Paedophiles!
A member of the Culture Media and Sport select committee Angie Bray has said that the “indulgence” of  Stuart Hall bore striking similarities to their approach to Jimmy Savile. Therefore, how can the BBC justify yet another documentary on child abuse in the Catholic Church re Silence in the House of God: Mea Maxima Culpa screened on the 10 June 2013 when there is just so much material under its own roof? It is becoming clear that the child abuse scandals in the Catholic Church were small in comparison to those in the BBC and other sections of society. We are making no excuses for those few bad Catholic priests.

Has the Licence fee turned the BBC into a bunch of anti-Catholic thugs?
At CUT it is becoming clear that British Catholics are getting fed up of BBC bias and bigotry and its fanatical Catholophobia. Is it time to break the BBC up? It has too much power and it has been damaging society for too long. Despite the fact that the numbers of people who actually watch the BBC continues to plummet, the licence fee is still intact. The BBC still has enormous influence and this influence is growing abroad, especially as English is now the one genuine world language. This may be a reason for pride to many British Catholics. However, if the main multi-media outlet in the English language supports abortion, contraception, homosexuality, and all the hideous bio-based innovations going on and at the same time does its level best to undermine the Catholic Church, ignoring all her good works in the third world and never mentioning the murders of her priests, sisters and lay people, we can see this as Cultural Totalitarianism being extended past our borders as a form of cultural colonialism And people must pay for the BBC via this out of date tax whether they watch BBC channels or not. And Fat Cat BBC managers continue to get pay cheques and pay offs that would make pop stars’ eyes water. 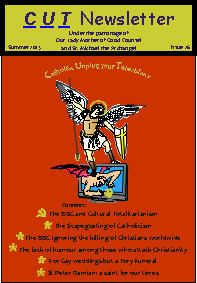 The Summer 2013 Newsletter has now been printed and will be in the post to members and anyone who request them in the next few days. If you would like to receive one and are not a member please let us know by email mazzalfa@tiscali.co.uk the newsletters are free. You may request more than one and pass them on if you wish.

Posted by Clear Vision Catholics at 05:31