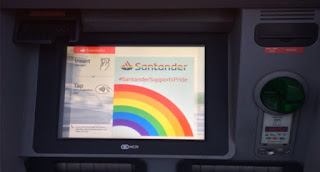 I went to my Santander ATM machine today only to be confronted by a huge rainbow logo and a slogan "Santander supports Pride" - shame on them. To support these Pride parades with all their disgusting visuals and actions so blatantly took my breath away, as we are now so close to LGBT totalitarianism that Nazi Germany of the 30s comes to mind. I went into the branch and complained pointing out all the Christian businesses that have been forced to close by the law because of their conscience when confronted by LGBT activists. For example Christian B&Bs who refuse to let homosexual couple have a double room with a double bed, or Christian bakers who refuse to bake same-sex wedding cakes, with "Support gay marriage" on it" etc etc. The manager then started to real off the inclusive mantra, to which I said I've had enough of this nonsense, and said I will be moving my account and walked out.

I do wish though that people who protest about this further attempt to further the cause of perversion would not smash these ATMs it's totally wrong to do this. And only gives the LGBT "community" a victim status which will just further their hideous cause even more. The reel victims of course are ordinary decent people.

Posted by Clear Vision Catholics at 10:56